Starting Out Again!
Leaving my full time post as a lecturer in July after 25 years was a mixture of regret, at leaving brilliant colleagues and questioning students, together with excitement and anticipation at being able to devote far more time to my passion for natural history photography.  I will hopefully be running more workshops next year, and continuing to write books and magazine articles, and these will be listed on my main web site. We have just built new small studio at the bottom of the garden, where I will be able to work on various macro subjects and other techniques such as time lapse and ultraviolet imaging.
It feels like a good time to start writing a blog about my new venture, covering both various natural history topics that I come across, as well as photographic issues that I hope will be interesting for readers. Do please send me any feedback!


When time is limited, i.e. when you have a full time job, there is the temptation as a photographer, to visit nature “hotspots” where you are virtually guaranteed of getting lots of hopefully saleable images. I have been very fortunate over the years to visit such diverse places as the Everglades in Florida, Shetland and Japan.  However, not only will the budget not stretch to visiting all of the places I would like to, I really do want to take this new opportunity of getting to know my own local “patch” in Surrey better, to visit at different times of year to really understand how it works, and hopefully this blog will show how much wildlife is present close to home.


A couple of weeks ago, for example, I spent three afternoons photographing just one clump of Broad Leaved Helleborine orchids (Epipactis helleborine), trying to capture the range of insects which visited the flowers, and pollinate them. Wasps were frequent visitors, and it turns out that the nectar that the wasps feed on contains a mild narcotic, making the wasp slightly drunk an lethargic, thus staying on the flower stem longer! Also, the leaves of the orchid apparently give off a chemical signal, attracting predatory insects who are duped into thinking the leaves are being eaten by herbivorous insects! 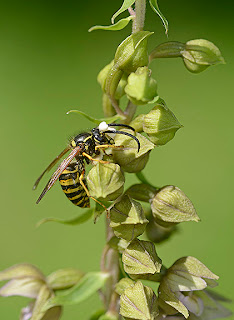 I also photographed this pair of mating soldier beetles. It would appear that one of the beetles was feeding on nectar whilst mating, and got one of the orchid pollinia stuck onto its back. 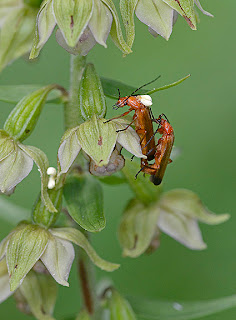 I will be visiting this site, consisting of Beech wood and chalk grassland frequently over the next few months, particularly as it is very good for fungi, and will no doubt post more images from there.
Both images shot with Nikon D800E, 105mm macro lens with 1.4X converter, and Nikon SB-R200 macro flash units.
Posted by Unknown at 05:46