As any nature watcher knows, fungi are very fickle subjects. One year there can be huge numbers of one species or another, the following year none at all. 2102 was one of the worst seasons on record for fungi, with reports of fungus forays being cancelled due to lack of specimens. In contrast, 2013 must surely go down as one of the best, with warm temperatures extending right into November, and  generally damp conditions – perfect for most fungi! There seemed to  be fruiting bodies everywhere. In some of my favourite locations I had to be careful where I stepped for fear of treading on them! I found perfect photogenic specimens of many species, and several species that  were new to me.  Although I am not a collector of “ticks” I do try to improve my identification skills each year,  not always easy, and I am always grateful to friends for help. Reading the identification books sometimes leads to some fascinating if worrying facts – for example, an Ink Cap (Coprinus atarmentarius) is listed as edible, but “causing alarming symptoms when consumed with alcohol!”  Another  species is listed as edible, but may turn one’s urine red (but probably not to worry!!).


I’ve really been enjoying photographing small details this autumn. Perhaps the most extraordinary I found is the underside of the Earpick Fungus (Auriscalpium vulgare), which is small, brown, and grows amongst brown leaves on buried pine cones. The underside is covered in a mass of spore bearing spines rather than gills. I’m sure I must have seen it before, but finding them in profusion this year has been quite a revelation. The specimen shown here was approximately 20mm across, requiring the full extension on my 60mm macro lens. 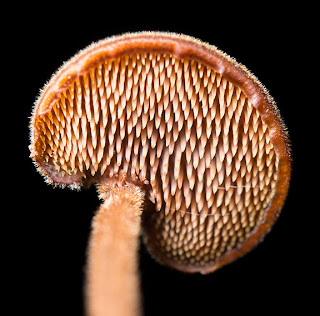 The Orange Peel fungus (Aleuria aurantia) is by no means rare, but I found hundreds of large specimens along the side of a newly surfaced road on a brief (very wet!) trip to Snowdonia a couple of weeks ago.  They really are stunning, and well worth searching for! 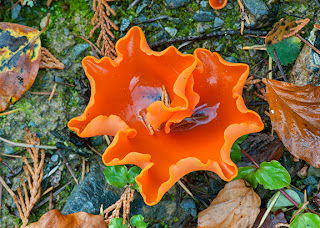 At the other end of the “attraction” stakes are two tiny parasitic  “Piggyback” toadstools,  the Silky piggyback (lower) Asterophora parasitica, and the Powdery Piggyback  A. lycoperdoides (upper) which grow only on the rotting fruitbodies of another toadstool: Russula sp. These were growing in the woods at the end of my garden. I needed to use a long exposure in dim light, and additional light from a small LED torch to get this image. 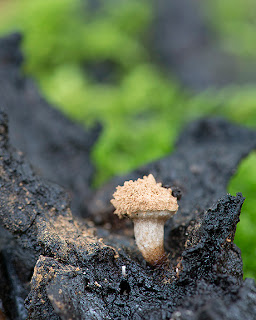 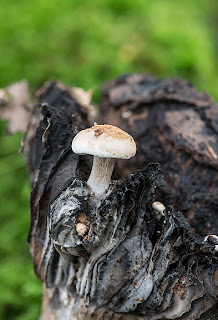 Although I only have a provisional identification for this toadstool, The Blue Roundhead: (Stropharia caerulea) I couldn’t resist showing this one. I found it at Winkworth Arboretum in Surrey  last week, and had never seen such a vivid blue toadstool before! 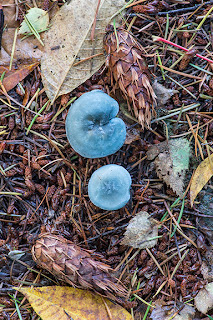 The Turkeytail (Coriolus versicolor) is one of our commonest fungi, a bracket growing on fallen logs, often in great profusion. This beautiful clump was on an old pine log in Snowdonia. 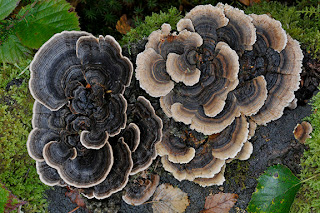 Although there is a specific Fairy Ring toadstool, many species grow in rings, as the mycelia spread out in all directions from a central point, like the spokes of a bicycle wheel. I found this ring of  Spotted Toughshank (Collybia maculata) growing amongst Pines in a local wood in Surrey. I used a wide angle lens to include the habitat in this shot on a very dull, rainy day. 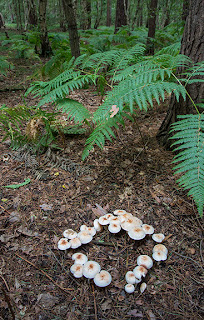 A very rare fungus that I have only seen once before is the Coral Tooth  (Hericium coralloides). I was given directions to this specimen growing in Richmond Park. Although past its best it was still an impressive and beautiful sight!  Apparently, in previous years, it has been picked by collectors. 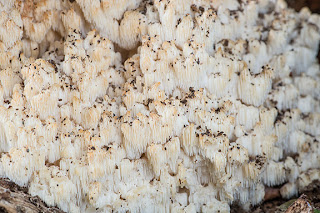 At the time of writing this, on the 1st November we still haven't had a frost, meaning that the fungi should persist for some time yet, and I will keep looking for different subjects!
My two “bibles” for identification are Roger Phillips’ “Mushrooms”, and the “Collins Guide to British Mushrooms and Toadstools” by Paul Sterry, and my friend Barry Hughes. A fascinating personal account of Fungi is “Mushrooms” by Peter Marren, full of wonderful anecdotes and facts.


I found a lovely Parrot Waxcap on the lawn this morning, and was about to photograph it when our new puppy trod on it!